Just a short report to give you an update for the North West in Bloom competitions that we took part in again during 2019. Every year we are given the choice to be a part of the Wyre in Bloom group that coordinate all the interested villages and towns in Wyre. Basically this is a group of people that meets 3 or 4 times a year and discuss things they can all do to bring some colour and cheer to all our beautiful villages and towns that we live in. This then gets judged by the North West in Bloom judges sometime in July and eventually leads to a grand celebration of awards and certificates in November that recognises the success and achieves of all the groups that have taken place throughout the North West. Wyre in Bloom is lucky enough to be very successful and also this year Inskip had its best year ever receiving 3 awards!

The village itself was awarded a Silver Gilt that is a great achievement in recognition of the flower planting and the standard of cleanliness and well maintained gardens and facilities the village offers such as the bowling green, YIP’s and church’s etc. So a big thank you for the obvious pride and care everyone takes in doing their bit for the village it’s appreciated and recognised. 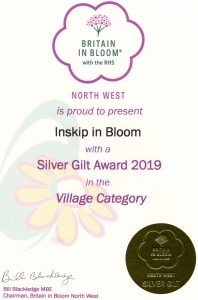 We also got a highly commended award for Carrs Green in opening up one of the foot path routes as well as making several other paths so you can get access into the centre of the common and observe the large variety of flowers and plants that grow on the green as well as the wild life that lives there. 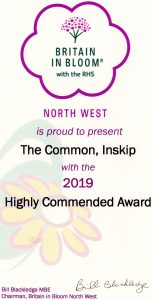 On walking through the village back in July the two judges were so impressed by one of the resident’s gardens that they eventually awarded Mr Paul Burrows the award of the best Private Front Garden in the whole of the North West. To be awarded this accolade from the many tens of thousands of gardens is something to be extremely proud of and as the Wyre in Bloom coordinator I would like to personally congratulate Paul and thank him for putting Inskip on the Bloom Map. Paul received a certificate and a glass bowl trophy to keep for one year. Well done Paul. 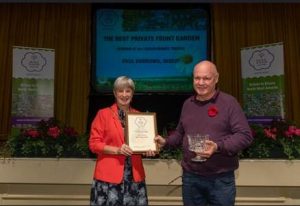 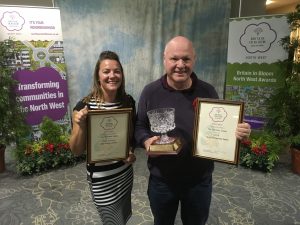 So 2019 was a great year for Inskip and what’s to become of 2020? I have enrolled Inskip to take part again for this year but once again I will send the shout out to anyone in the village that would like to get involved, either as a volunteer planting a few flowers or looking after a flower bed or even taking on a more organisational role and attending some the meetings at Wyre. Any help is appreciated as both my wife and I have done most of the planting now for more years than I care to mention and we need some new ideas and new blood. So if any existing villagers or any of the new residents that have chosen to make Inskip their home (Good Choice and Welcome) would like to get involved please contact me and we can have a chat. I would also like thank Jimmy Hall for his assistance with opening up the paths on Carrs Green. I know it has brought a lot of pleasure too many people. Thank you Jim. As always a lot of the praise and glory should go to Andrew Maxfield our lengthsman whose continued hard work and passion in keeping the village looking tidy and loved at all times benefits us all. Many thanks Andrew you are greatly appreciated.
So goodbye for now.
Alan Lingard
Telephone 01995 679239